These mini blueberry pies made in a muffin tin feature a homemade lard crust and are the perfect size for parties and snacking! The sweet flavor of the warm berries pair nicely with an easy lard pie crust.

With spring right around the corner, I have been really looking forward to blueberry season. I know our local area does not have native blueberries until around mid-June, but I love to take advantage of the berries from other parts of the country.

When blueberries go on sale, you can often find me freezing them for smoothies, and baking. These Mini Blueberry Pies Easily Made in a Muffin Tin are one of the recipes I look forward to making every year.

Blueberries are one of my favorite fruits because they are super versatile. I love that they can be used in sweet recipes like pies, but they also pair well in savory salads.

They are relatively inexpensive and are the perfect filling for mini pies in a muffin tin. My kids love blueberries, and so does Jared. In fact, some of his favorite sweet treats contain none other than blueberries.

When I make these Mini Blueberry Pies, I often use store-bought pie crust. One complaint I have recently had with store-bought crusts are they are really thin and almost greasy after they bake up.

For these mini blueberry pies, I used a lard-based crust made with Armour Premium All-Natural Lard. You can find this new line at Walmart in the baking aisle, but traditional lard would work too.

The funny thing about lard is when most people hear the word they automatically associate it with being unhealthy. Truthfully, it is even better than most other fats on the market!

After using it 3 times to make different pies, I have to admit this stuff rocks!! I finally cracked the code on how to get bakery style pie crust right at home! I knew butter was not the key and always wondered how my favorite, local spot got such delicious, light crust.

Thanks to this lard crust recipe, I was able to finally master lard pie crust.

Now that I know how to make the perfect pie crust, I wanted to share it with you all! Seriously, for me this is a mini breakthrough since I tried all sorts of shortenings, butters, and whatnot over the years.

Finally, I know that in order to make a delicious pie crust I need to stock up on Armour Premium All-Natural Lard. This lard is flavorless and will not alter the flavor of ANY recipe you use it in.

How to Make a Lard Pie Crust

Seriously you all, that is it. All you have to do is literally work the dough with clean hands until it is fully combined and not sticky. The trick is to ONLY use a little water at a time to not make a sticky crust.

You want just enough water to allow the dough to mold into a large ball. 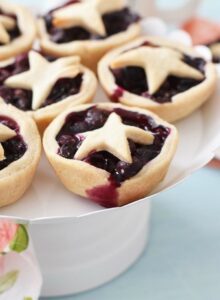 Print Pin
No ratings yet

Mini Blueberry Pies Easily Made in a Muffin Tin

These mini blueberry pies made in a muffin tin feature a homemade lard crust and are the perfect size for parties and snacking! The sweet flavor of the warm berries pair nicely with this delicious and easy pie crust.

*Nutritional Values listed may differ and are meant to be used as a guide.