Cannoli are a delicious Italian pastry typically filled with cream and ricotta cheese. What better way to celebrate the start of the summer than by inviting friends over to your home for a Cannoli party? Whether you want to make them from scratch or order them in advance from Golden Cannoli, there are plenty of creative ways that you can go about throwing this amazing event! This post is sponsored by Golden Cannoli. All views expressed are that of our own.

Did you know that Golden Cannoli makes enjoying this traditional Italian dessert at home effortless! Today, we are sharing why we love Golden Cannoli. We are also sharing an easy recipe for semi-homemade French Vanilla Cannoli Cupcakes. The best part about these cupcakes is that you can buy the cannoli chips and filling on the Golden Cannoli site, so you can whip them up in no time!

If you are looking for the hands-down BEST Cannoli filling ever, Golden Cannoli has you covered! Their fillings are made with natural whole milk ricotta, and are kosher dairy KVH, trans fat free, contain no preservatives, no artificial flavors or colors, and are nut free! Pastry bags can be purchased directly online and are just under $15 per bag! Each bag fills 15 large or 40 small cannoli and can frost 24 cupcakes. They weigh 2.5 pounds each! Just snip the top and fill or add the filling to a star tip bag for a prettier swirl.

But it gets better because they also make premade cannoli shells, and chips! When I say these products are the BEST I mean it! I have eaten a lot of cannoli in my life, but nothing was as tasty as the subtle creations I whipped up using their shells and filling!

Available both online and in-stores throughout New England, Golden Cannoli makes enjoying these coveted pastries at-home so easy! We received a large shipment of their Cannoli Filling, Shells, and Cannoli Chips. They also offer chocolate-covered shells, and Chips and Dip platters.

We will be giving away an assortment of Golden Cannoli products as well as a Rustic Marlin Tray, and a Nespresso Coffee Maker so you all can enjoy this bakery-like experience at-home this summer. Stay tuned for the post on our Instagram page soon!

To celebrate the start of the summer, we recently enjoyed a Holy Cannoli Coffee Bar set up which features various cannoli pastries I stuffed at home with crunchy add-ons like candy, chocolate, nuts, and more! The shells were so easy to fill thanks to having my trusty Golden Cannoli pastry bags and shells on-hand. I also featured my French Vanilla Cannoli Cupcake which you can find the recipe for below!

Displayed, we had our new Nespresso machine running– because no cannoli is complete without a cup of hot coffee, or some espresso! We also had Cannoli Chips & Dip, Cannoli Cupcakes, and various Cannoli flavors.

My Rustic Marlin Tray displayed is sooo pretty. Admittedly, I didn’t want to risk my kids scratching it! However, it is 100% fully-functional as a serving tray, but also serves as a beautiful piece of décor.

I displayed the various cannoli I effortlessly assembled. I chose some tasty textures to dip the edges in and even chocolate and peanut butter dipped the ends of some of the dry shells.

The French Vanilla Cannoli Cupcakes were such a hit with the family.

To say that my kids and husband enjoyed this set up would be an understatement.

I did freeze some of the extra pastry I made, but they sure did have a blast with the sweets they chose.

Now that you seen all this cannoli goodness, lets get to this Semi-Homemade French Vanilla Cannoli Cupcakes. These can be made with your favorite cannoli filling, but trust that Golden Cannoli makes the best filling, and it is really inexpensive considering!

These cannoli cupcakes will remind you of your favorite Italian bakery, but can be recreated at home thanks to Golden Cannoli! You will need a few supplies to make them which you can see below. This recipe makes 24 cupcakes.

I varied my cupcake toppings to mix things up and make each cupcake a little unique.

Cannoli Chips – I really love the added Powdered Sugar Cannoli Chips I added to each cupcake. You will need the 5.1 ounce bag for 24 cupcakes.

Strawberries – I sliced mine into 1/4″ thick slices for a pretty look tucked into the cream.

Walnuts – Crushed walnuts add a pretty look and delicious texture that pairs well with the filling.

Mini Chocolate Chips – These go together with cannoli filling like peanut butter with jelly.

Maraschino cherries – I really loved the stemmed variety which added such a pretty pop of color and flavor to the cupcakes.

For the cupcake base, I created a semi-homemade French Vanilla Cupcake recipe. This recipe is a go-to that produces hands-down the moistest cupcakes ever!

Add the cake mix, pudding pouch, eggs, oil, extract, sour cream, and water to a mixing bowl and whisk until mostly lump-free. There might be a few stray lumps and that is okay.

Pour batter into cupcake liners (24) and bake at 350 degrees F. for 16-18 minutes. Cupcakes will be springy, slightly golden-brown and a toothpick inserted into the center will come out clean.

Allow cupcakes to cool before using a paring knife to carefully cut a 1″ cone out of the center. This is only if you want a stuffed cupcake. If you prefer simply a topped cupcake leave them as-is. Decorate as desired.

These can be eaten plain, topped with filling, or frozen for later consumption. Refrigerate cannoli cupcakes for up to 3 days for best taste. 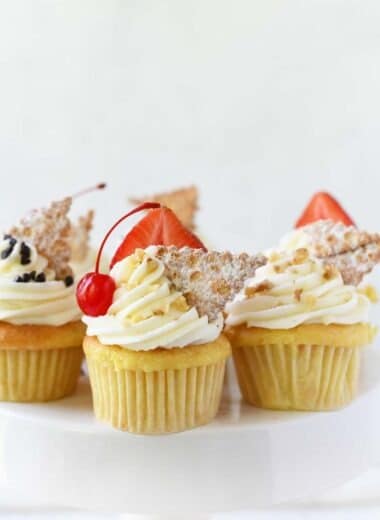 Nutritional values may vary and are only based on plain vanilla cupcakes. Values are meant to be a guide. 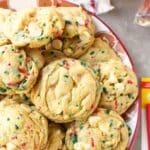 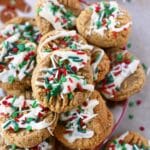 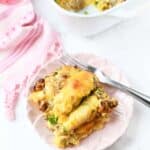